I was so delighted when it snowed last week. It wasn't just a quick fall-and-melt either, but lay purposefully in the garden, making everything hushed and white for a whole day and not fully disappearing until three days later.

I am relieved to see that the echiums I'd protected by covering their roots with fleece and bubble wrap and bricks (to stop the foxes from scattering it all about) survived really well. It's impossible to try and protect the whole plant because they are too big and anyway don't like having their leaves hemmed in - I have tried it in the past. So three generations of echiums have survived: the seedlings from last year (although I must say, they were  hard hit and did well to survive), the adolescents from the year before and the ones that will flower this year. 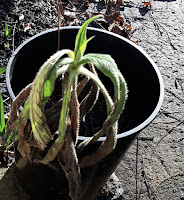 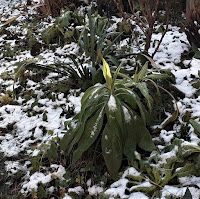 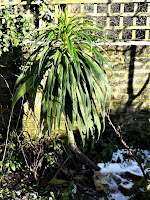 One sad but surviving little echium seedling,  a one-year-old plant and one that will flower this year

But the two things I was really excited to see are both tiny: the first small group of snowdrops under the tree fern which had been holding back ventured out into the snow. Apparently snowdrops are among the plants that produce their own antifreeze protein which stops ice from crystallising within them and enables them to flower in really cold weather. 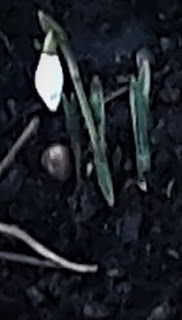 The other plant was the magical, always surprising winter aconite (Eranthis), which suddenly showed itself fully in flower and bright yellow, snuggling into an icy patch. Aconites too, produce their own antifreeze protein and seem to actually wait for the cold weather before deciding to flower.

I have had difficulty establishing both the snowdrops and the aconites in this garden. Having mulched and raised the beds as much as I can above the clay, several of the snowdrops  have now succeeded and are beginning to establish small colonies. Of the many aconites I have planted only one remains. For years it produced one flower per season, but this year there's a little group of about six flowers so I think it's really established. In one of my previous homes we had a bit of woodland where these wonderful golden globes with their pretty green ruffs flourished in a small glade and I would be terribly disappointed if I couldn't manage to cultivate at least one!

Some plants by their form or shape seem to revel in the snow. The Bramley apple tree always looks particularly sculptural when its big branches are covered in white and the oleander's narrow leaves, the tree fern's feathery ones and the  hand-shaped leaves of Fatsia japonica all take on a painterly quality.

Snow's insulating effect means that when it covers plants it's like a warm blanket. The giant parsely, waiting until spring to be planted in the ground, was well protected by its plastic cloche under a layer of snow.

What I forgot to look for were paw and claw prints so by the time I found them they were a bit vague, but here is one place the foxes definitely investigated ! 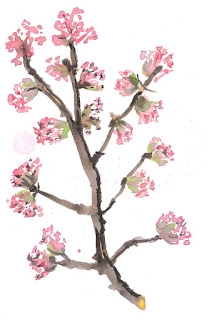 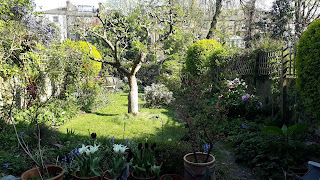 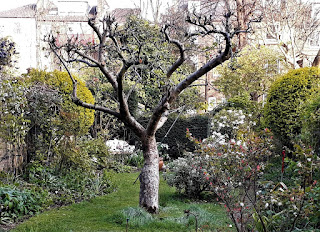